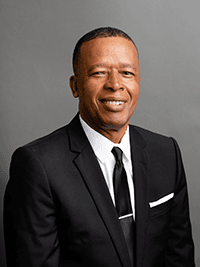 Commissioner Gary Gilliard was born as Robert Gary Gilliard to the late Sergeant Robert and Jackie White Gilliard. He is currently the oldest of four children; he lost an older sister the week of his graduation. He was born on Fort Stewart and grew up in the Rebecca Street Public Housing Development. He matriculated in the Liberty County Public School System, graduating from Bradwell Institute in 1974. Upon graduation, Mr. Gilliard worked at a gas station on Ft. Stewart and later at the Liberty County Recreation Department, before finally landing a position with the City of Hinesville in 1983. He worked with the City of Hinesville until 1992, when the City outsourced its public works department to OMI/CH2M Hill. In 2016, ESG was awarded the City of Hinesville Public Works contract, and Mr. Gilliard was promoted to Regional Manager of the company.

Mr. Gilliard joined the membership of the First Calvary Missionary Baptist Church at the tender age of nine.  Through the years, he would serve as a fill-in Church School teacher, a member of the Trustee Board for a three-year stint, facilitator of the drug/alcohol ministry, and as chairman of the Capital Stewardship Campaign. Mr. Gilliard serves as President/CEO of Seven Ministries of Liberty County, a 501(c) 3 faith-based community organization that provides philanthropic relief and scholarships to residents of Liberty County. To raise funding for Seven Ministries, Mr. Gilliard and members of the board sponsor the annual Jackie Gilliard-Henderson Memorial Scholarship Walk-a-Thon in May.

Mr. Gilliard was reared by parents who were actively involved in politics.   From the time he was a teenager, his parents were constantly involved in assisting candidates to become elected. When a high school colleague, who was the “sitting” county commissioner of District-5, approached Mr. Gilliard about running for his seat, Mr. Gilliard decided to enter local politics.  He ran unopposed in 2008 and would run unopposed over the next three election cycles. His personal philosophy is that a person needs to give back to the community where he/she lives.  Being a county commission affords Mr. Gilliard the opportunity and privilege to give back to his community. As a commissioner, Mr. Gilliard is a member of the HAMPO Policy Committee.  He is actively involved with the Liberty County Athletic Hall of Fame Selection Committee.  He is President/CEO of Friends of Hineshaw Rosenwald School.

Mr. Gilliard is married to the lovely Felecia Gilliard, and they are the proud parents of two adult children and four beautiful grandchildren. Mr. Gilliard holds dear to his heart Proverbs 3:27 [(KJV)]—“Withhold not good from them to whom it is due, when it is in the power of thine hand to do it.”